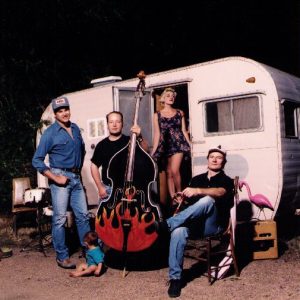 About the band:
Coming from a state known for it’s tie-dyed bands, Colorado’s Hillbilly Hellcats tell stories of rockabilly cats, drinking and booze, as well as white trash and trailer parks. Guitarist Chuck Hughes formed the band in 1994, after previously playing rockabilly standards in several local bands. Building on these influences, along with all the other music that has come since the rockabilly heyday of the 50’s, the band has created a sound that is a “well rounded mix of rockabilly, swing, bluegrass and a little bit of punk”. Their “Rev It Up with Taz” and “Our Brand” records are among the best albums ever made in this genre.

Along with winning the reader’s poll in Westword Magazine, 1995-2000 in the Roots music category, their touring has taken them to 16 countries and 40 states, including, most recently, Australia and New Zealand. Since 2001, their music has appeared over 4700 times in TV and movies. They have almost 3 million streams on Spotify.

Sync licensing:
Hillbilly Hellcats music has been in TV shows since 2001, 4700 times, according to Tunesat.com . In 2017 their song, Hillbillies on Speed, was used in the 100 million selling Far Cry 5 video game.