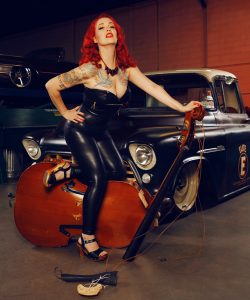 About the band:
Screamin’ Rebel Angels’ band leader, Laura Palmer is WINNER of 2020 Ameripolitan as “Best Rockabilly Female” artist!
Screamin’ Rebel Angels’ unrelenting and infectious original Rock ‘n Roll has kept the dance floors pulsing, and roofs rattling across stages, airwaves and turntables around the globe since 2011. Hailing from Brooklyn, NY, this band’s wild live performances are high-octane adventures that invoke the primitive energy of original era Rock ‘n Roll, infused with the soul of early Rhythm & Blues, and invigorated with the raw power of punk. But that’s just where it gets started. Screamin‘ Rebel Angels are moving the genre forward, and making it their own with the release of their new album Heel Grinder.

Fronting the band is Laura Palmer, a versatile multi-instrumentalist, song-writer and producer, who is well-respected in the world-wide rockin’ musical community. Equally adept at slapping out the rhythm on an upright bass or picking on a big ol’ Gretsch, Laura Palmer’s on stage presence and powerful vocals command your attention. Brian Hack’s stratospheric lead guitar and introspective songwriting pair well to create a truly unique sound. Screamin’ Rebel Angels Regularly tour the U.S., Canada and Europe.

Recent Press Quotes:
“The second album from New York’s Screamin’ Rebel Angels is a breathless blast through a set of mega high octane, hard hitting rockabilly. Singer Laura Palmer has the kind of voice that could fell a dinosaur at 20 paces – awesomely powerful and able to cover Little Richard’s “Oh My Soul” and not suffer by the comparison!” —Mark McStea, Vive Le Rock, Issue 63, May 2019

“Right ahead of Nicky Curran, we had Rockabilly new gals and guys, Screamin’ Rebel Angels, with ‘Oh My Soul’ from the rockabilly hot bed of Brooklyn in New York. Follow what they’re doing, because they are playing around all the time, and making some new records that have one foot in the past and one foot moving forward all the time, and That’s the trick to the whole thing. It’s Rockin’ and it’s swingin’, it’s old and it’s new, all at the same time.”
—Slim Jim Phantom, Rockabilly Raveup SiriusXM/The Stray Cats, April 2019

“…one of the most electrifying acts to burst onto NYC’s rock scene since Max’s and CB’s. … Music Journalists take note.” —Rock and Roll Globe Tweet, March 2019

“It’s an exceptional album and one that has already set the bar ridiculously high for other artists to knock it off as my album of 2019. ” —Lee Powell UK Rock n Roll magazine, February 2019